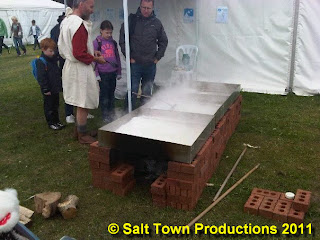 Traditional open-pan salt making made a comeback in Middlewich on September 24th, albeit briefly. A demonstration of how the process works was staged at this year's Roman Middlewich Festival at Harbutt's Field. This is particularly appropriate for the festival as this method of producing salt remained essentially unchanged from Roman times until the last of the Middlewich open-pan works ceased production in the 1960s.
In a conversation with David Leithwood of Middlewich Heritage Society, I learned that the three steel salt pans had been commissioned by the Town Council's Heritage Officer, Kerry Fletcher, for occasions such as this (iron pans were used for industrial salt production in recent times but the Romans, before the harmful effects of the metal were recognised, used lead - hence the street name 'Leadsmithy Street').
The process of salt-making is very simple indeed. Brine is poured into the pans and a fire lit underneath. 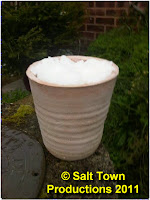 As the salt crystallises it is raked to the side of the pans and then put into tubs (at the festival small Roman style pots full of salt were being sold at the bargain price of only £2).
In practice, of course, the industrial production of salt by this method was much more complicated and required a lot more skill. Varying degrees of heat and different additives to the brine produced a variety of  salt crystals and, thus, different types of salt for a multitude of purposes.
A very pleasing feature of this  comeback for traditional salt-making is that the brine used is 100% genuine British Salt brine from the brinefield at Warmingham (near to the Bear's Paw pub, we're told) and so the salt produced is authentic Middlewich open pan salt.
Now here's a thought: I've seen salt produced on this sort of scale by enterprising producers using natural sea brine  to produce the much sought-after 'sea salt'.
Now I wonder....