RE-DEDICATION OF THE WAR MEMORIAL NOV 1972 - THE SALUTE 3 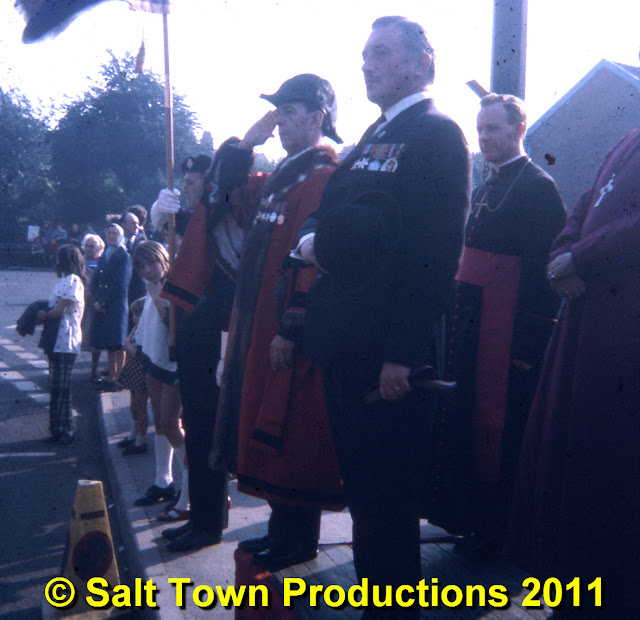 Another in our series of slides covering the service of re-dedication and the procession  which followed. In this slide we see the then Chairman of the UDC, Cllr Fred Stallard (after whom the residential road connecting St Ann's Road and Sutton Lane is named), taking the salute as the procession reaches its destination at the Royal British Legion Club in Lewin Street.
For most civic occasions in this period the Chairman wore an ordinary suit with the chain and civic insignia around his neck, but here we see a rare outing for the Chairman's robe. The hat is an even greater rarity. It is, in fact, the only time I, personally, can ever remember seeing a UDC Chairman wearing it.
And, as can be expected from a generation which took part in the Second World War, medals are much in evidence.

Geraldine Williams Lovely pic Dave. Nice to see Bishop Brewer, who was also Parish Priest at St Mary's, in the line-up. (btw the shadows are getting longer!)
(The latter is a reference to this posting -ed)


Dave Roberts Here's a sobering thought. If I'd tried to get this shot nowadays with my posh Olympus digital camera, the chances are I would have missed Fred's salute, as it takes the shutter about two seconds to fire. At least with the old Kodak Instamatic the shutter opened when you pressed the button. In actual fact, I get most modern shots on my Blackberry. Perfectly adequate for what i do.