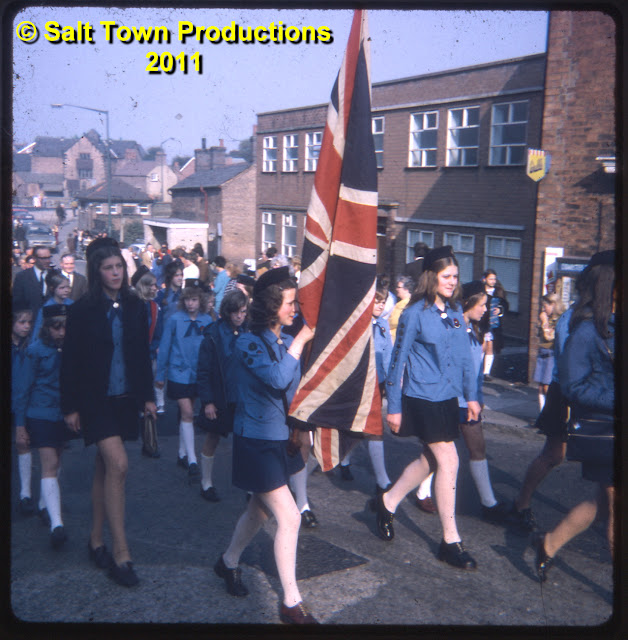 In the wintry sunshine of a November Day in 1972, the 2nd Middlewich Girl Guide Company takes part in a procession from the town centre to the the Middlewich Royal British Legion Club, after a service of re-dedication of the war memorial, which had been moved from  the junction of Lower Street and Hightown to a new position closer to St Michael's churchyard at the top end of the new 'piazza'. The service was conducted by the Bishop of Chester and many local organisations took part in the service and procession (as, of course, they do on Remembrance Day every year). We have a series of slides of this occasion and will be featuring them from time to time, as we get closer to November 11th this year. The girl guide carrying the flag, by the way, is my sister Cynthia, then aged 16. To her right is Fiona Williams, daughter of Trevor Williams who ran a delicatessen in the town for many years. Fiona, memorably, was our 'Julius Caesar' in Middlewich Youth Theatre days.
As the procession negotiates Leadsmithy Street we can see, to the extreme right,  part of Les Gibbin's shop, with its Walls Ice Cream sign and its cigarette and Wrigley's Chewing Gum machines, which stood (and still stands) where Leadsmithy Street becomes Lewin Street. The shop is still there, but empty. It last served as offices for J&M Print.
In the left background is the old mill which is now the base for Town Bridge Motors and, below this, we can see the public toilets, built on stilts above the wharf, which are perpetually under threat of closure..
To the right of that is, just above the bus shelter, the wharfinger's cottage which is part of the Town Wharf collection of buildings. It's interesting to note that, at this time, the cottage wasn't white-washed.. It's probable that none of the buildings on Town Wharf were white-washed at this time, but must have been so treated a few years later, as evidenced by this shot taken during the Kinderton Street remodelling. If the white-wash had only recently been applied, this would help explain why the buildings seemed to be in so much better condition then than they do now.

Geraldine William Is that Clarence Costello on the right of the band of councillors? My husband's aunt, Mrs Battersby, an erstwhile neighbour of yours, lived for a short time in Wharf Cottage (what does 'wharfinger' mean?) after her husband Arthur, who was Stationmaster, died and she had to leave Station House.

Dave Roberts ‎'Wharfinger' is defined as 'one who owns or keeps a wharf'. In this context, the man who managed the wharf. Not my word, but one used recently by the Town Council to describe this cottage.
‎...and yes, I think that is Clarence. To his left is a gentleman who I think may be Ivan Glover, clerk to the UDC at that time, and the gentleman behind him might possibly be 'Mac' Telfer.

Geraldine Williams Yes, I thought it was Mac Telfer with his distinctive black hair.