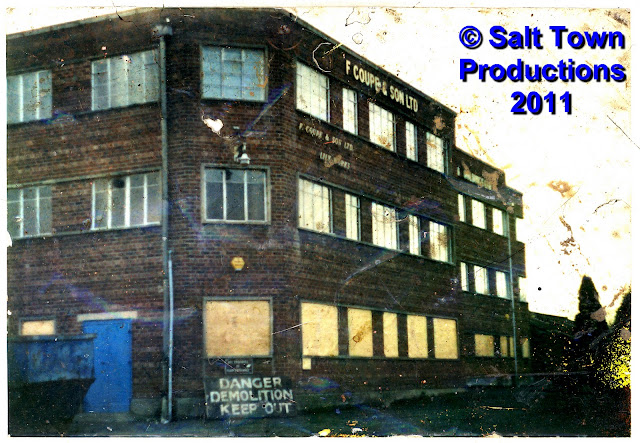 Another 'rescued' photo - a print this time - which was found on the floor of our garage during a clearout. It had been lying, face-down, on the concrete floor for years, neglected and extensively trampled on. Not an ideal filing system for photographs, of course. I rescued it and laminated it, but a little too late to prevent a lot of damage. Still, the photograph does still exist and, helpfully, includes a hand-painted sign telling us exactly what is going on.
F Coupe & Sons (parent company Kinderton Holdings Ltd) were manufacturers of baby clothes and gave employment to a lot of women and young girls in Middlewich. They had two factories - the Lily Works and the  Orchard Works which was a short distance away across the road at the top end of Southway (now the site of Tesco's supermarket).

The Lily Works site in St Ann's Road is, of course, now occupied by the Newton Court Care Home, operated by BUPA. This was, according to their website, 'registered in 1997' . The Lily Works was demolished in 1995. but not before it had been ravaged by a disastrous fire, which did not make a lot of difference as the works was due to close anyway.
One reminder of the old works remains at the site: the brick wall and metal fencing which runs along St Ann's Road was retained and refurbished when the new Care Home was built

Sherry Hill-Smith I worked at the care home (Newton Court) that was built in its place as the activities officer.
But there again half of the females I ever met living in Middlewich have at some point worked there.
Some of the residents used to tell me about how they worked there (Lily Works) making clothing.


One of our family's many 'honorary uncles' Sidney Webb, who worked for many years at Ideal Standard, and was also a popular local accordian player, lived in a house next to the Lily Works and, in his final days, when the time came for him to move into the brand new Newton Court, was given a bedroom overlooking his old house and was thus, in his words, able to 'keep an eye on it' - ed.
Posted by SALT TOWN PRODUCTIONS at Friday, September 16, 2011