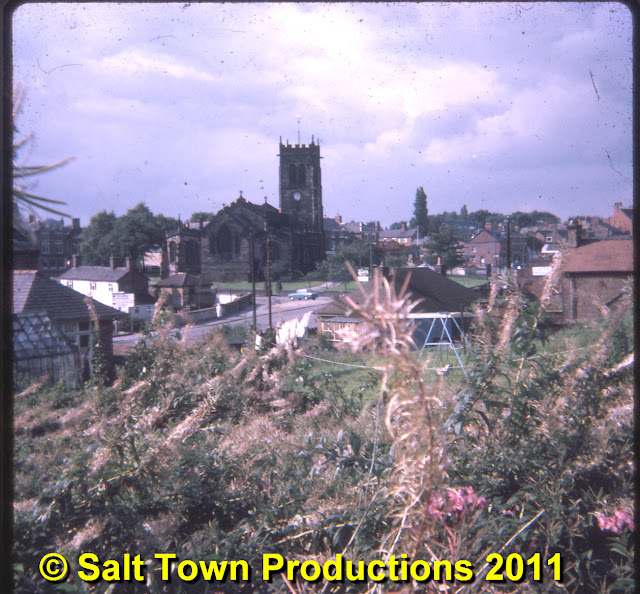 Here's an interesting shot from 1974. We've gone back yet again to Kinderton Street in the period when Costello's shop and the rest of the buildings in the row were just about to be demolished. I stood on the waste ground at the top of the bank behind the  derelict shops and took this picture - largely because, until then, it hadn't been possible to photograph St Michael & All Angels church from quite the same angle - not without trespassing on private property, that is. An equivalent view today would be from the corner of King Street and Kinderton Street at the top of the pavement which sweeps down into the town from there, but the view nowadays would be partially obscured by all the trees since established along the route.
To the left is the (by now whitewashed) Wharf cottage in Leadsmithy Street but what is the low-eaved building on the extreme left, in Kinderton Street? Close examination of the slide shows that there is a greenhouse at the rear of the property. I think the answer lies in this slide and that the building in question is at the rear of the elusive Percival's, a building we've glimpsed from various angles at various times in this series but never (as yet) got a proper view of.
Or, alternatively, has Percival's disappeared by this date and the building in question the one that can just be glimpsed behind The Talbot in the church tower view? That building certainly would appear to have a greenhouse of some kind adjacent to it and Percival's building looks as if it might be too tall to be the one in our 1974 photograph.
The bungalow at the top of Mill Lane can just about be made out through the weeds, just below and to the right of the church, quietly minding its own business and little suspecting that 36 years later it would suffer the indignity of having solar panels heaped on its roof and looking, after all the years it has stood there, completely out of place in its setting.
Nowadays, of course, drivers coming into Middlewich over the Holmes Chapel Road (or Station) bridge can get almost the same view of the church but, back in 1974, to be able to see the church like this, from this distance, was quite new and quite striking.

Email ThisBlogThis!Share to TwitterShare to FacebookShare to Pinterest
Labels: ST MICHAEL and ALL ANGELS FROM KINDERTON STREET 1974