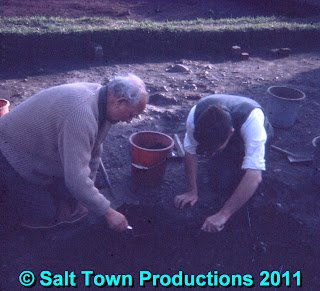 The gent on the left in this picture is my Dad, Arthur, taking part in a Sunday afternoon dig in King Street in 1969. This was not the main dig, which was immediately behind our house at number 33  and was, many years later, to be the scene of the 'Community Dig' - see this posting,  but a subsidiary investigation into a piece of land further down King Street, where the road bends and the public footpath begins its course 'down Bill Hewitt's', past the 'stone houses' and the new housing developments, to run along the side of the River Croco, emerging at the bottom of Harbutt's Field.
It's likely that this small parcel of land would have been the site of another of those Roman iron works or salt works which lined the road running up to the Roman Fort.
The piece of land in question has now been built on, ruling out any further investigation in the foreseeable future..
Our picture illustrates the painstaking work involved in archaeology. Volunteers will spend long hours sifting inch by inch through soil and silt deposits to build up a picture of life as it was many centuries ago.
Many have criticised the Roman Fort site on the grounds that 'there's nothing there', but it's the fact that Harbutt's Field is just a large empty space which fuels the imagination and enables the past to be brought vividly back to life when the Roman Middlewich festivals are held there.
Posted by SALT TOWN PRODUCTIONS at Wednesday, October 05, 2011