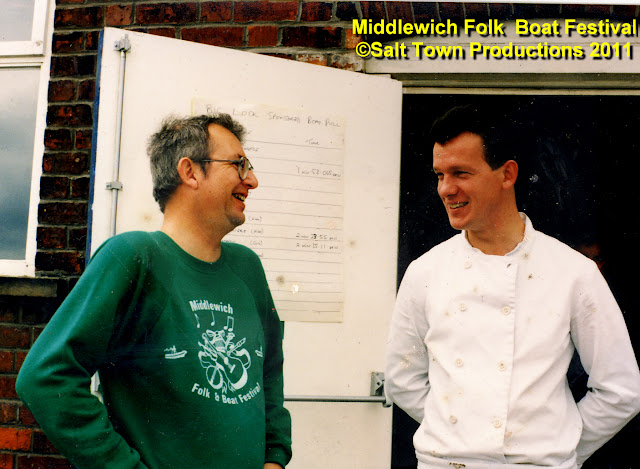 Our exclusive picture shows future Town and Borough Councillor Mike Parsons sharing a joke with Tony Hatton, then proprietor of the Big Lock pub, sometime in the early 1990s.
Although Mike was one of the organisers of the Folk & Boat Festival, and Tony one of its keenest supporters at this time, the photograph was actually taken on a different occasion, at the Annual Boat Pull organised by the Trent & Mersey Canal Society.
Mr Parsons is sporting an example of the second version of the MFAB sweatshirt. The original design, produced for the first festival in June 1990, was similar, but had the wording Middlewich 1st Folk & Boat Festival with the festival dates underneath. The 'Middlewich' and '1st' should, arguably, have been the other way around.
Original examples are now much sought after collectors' items.
Our slightly tongue-in-cheek title is an oblique reference to the Cheshire Life which always labelled photographs of our betters, clutching glasses of champagne and laughing uproariously, with such captions as Lord Weaverham shares a joke with Lady Cholmondeley-Twissington-Smythe during the Wilmslow and District Asparagus Growers Annual Dinner Dance at The Grosvenor Hotel in Chester.
We do not move in such circles, so this is the best we can offer.
Facebook feedback: