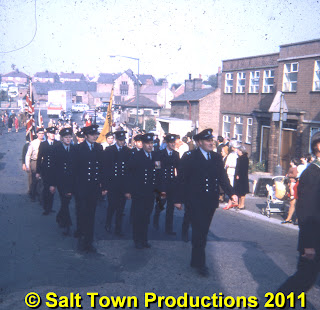 Another in our series showing the Service of Re-Dedication and the procession from the Town Centre to the Royal British Legion Club in Lewin Street. This time we see the town's volunteer Fire Brigade (not, in those simpler days, the 'Fire & Rescue Team'. And they kept their fire engine in the fire station, not in the 'community fire station').
Leading the firemen is John Garner and, immediately behind him, to the left, is Ron Grainger, who had been a member of the MUDC's Road Gang but was now part of the team running the new Water Pollution Control Works in Prosperity Way, thus entitling him to drive the Departmental Tangerine and Delft Blue Land-Rover around the town.
On the skyline is a row of 1930s semis in King Street, and I'm still trying to decide whether or not the one on the extreme left is number 33, our family home from the late 1950s until the early 2000s. The house in question does have a conservatory (or 'glasshouse' as we called it) as did Number 33 , but seems a little too close to the Old Mill. Possibly our house was actually a little further to the left and out of shot.
Behind the fire brigade can be seen the Scouts, awaiting their turn in the limelight and no doubt being shepherded along by at least one person called Hough. It's the law in England that no Middlewich Scout Troop can exist without at least one Hough being involved. 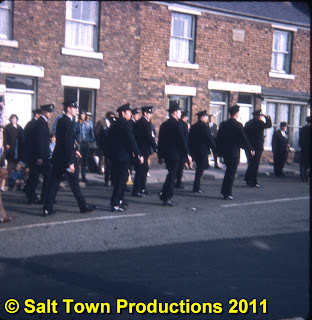