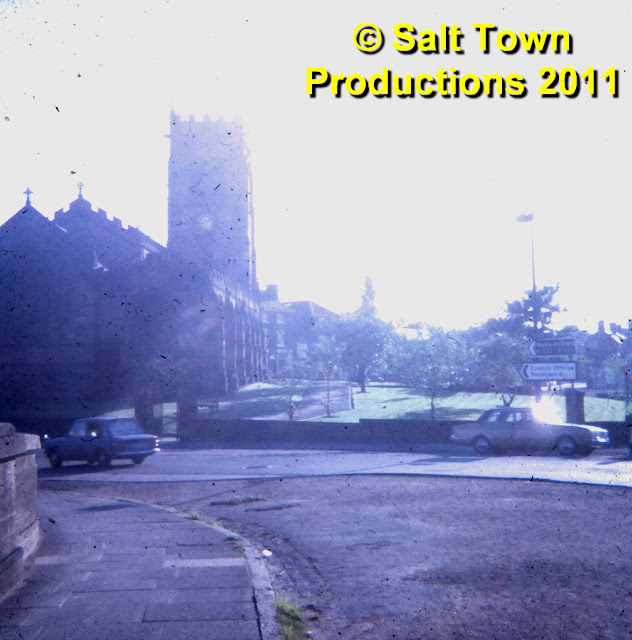 Another scene which doesn't seem to have changed all that much in the last thirty-nine years, apart from the all-enveloping dense vegetation which has engulfed the town since then. This view of St Michael & All Angels Church and its environs can best be dated by the antiquated looking cars (and the fact that there aren't many of them) and the total lack of traffic lights on the bridge. Few can deny that Middlewich these days is beset by severe traffic problems and that developments in the pipeline are calculated to make things much worse instead of better. Conversely, any scheme which might alleviate these problems has huge obstacles thrown up in its path. And how many towns are obliged to put up with a 'bypass' which comes to an abrupt halt in the middle of a field?
Anyway, back to 1972; to the right can be seen one of those confusing local signs pointing the way to 'Council Offices Sandbach' which actually became less confusing two years later when the Congleton Borough Council came into being and based its main offices at Westfields.The green sign above it directs people to Stoke-On-Trent.
Posted by SALT TOWN PRODUCTIONS at Friday, October 14, 2011

Email ThisBlogThis!Share to TwitterShare to FacebookShare to Pinterest
Labels: CHURCH FROM TOWN BRIDGE 1972