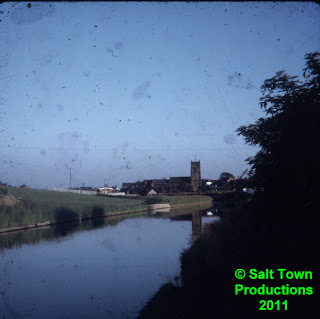 Here's a view which appeals to many as they stroll along the canal towpath from the Big Lock into the town centre. In 1972 the enormous amount of trees, bushes and other vegetation we see today had not yet encroached on the scene and we had a clear view of St Michael & All Angels church. To the left of the church is a cluster of buildings in Lewin Street including The C of E Infants School and the Wesleyan Methodist Chapel, both of which, as we've seen, were still there in 1975. The small brick building with the white eaves, middle left, is a pumping station for the then new Water Pollution Control works. An access road for this building ran (and still runs) from King Street, out of shot to the left. This posting has a picture of the MUDC's Land Rover standing on that road at the King Street end.
The field on the left was once the site of the Kinderton Salt Works, the last remains of which were still there when I was a small child, but is now the domain of  'town houses'. Remarkably, though, a public footpath,  slightly re-routed, still runs down from King Street and along the River Croco to the bottom of Harbutt's Field.
The concrete structure on the far canal bank, just below the church in this photo is one of the overflows from the canal into the river which runs, unseen, parallel with the canal at this point on its way to join the River Dane beyond Harbutt's Field.
This overflow is of the simplest type - when the water level in the canal is too high it simply spills over the concrete sill into the river. In fact this arrangement is sometimes referred to as a 'spill', although one canal writer I read years ago coined the much more satisfactory term 'slurp' to describe it.
To the right, behind the bush, is the site of Seddon's Pepper Street works on which the 1975 Inland Waterways Association Rally would be held. This was one of the events which eventually sparked off ideas for the original Middlewich Folk & Boat Festival. Nowadays, of course, it's the home of 'The Moorings'.
Facebook feedback: