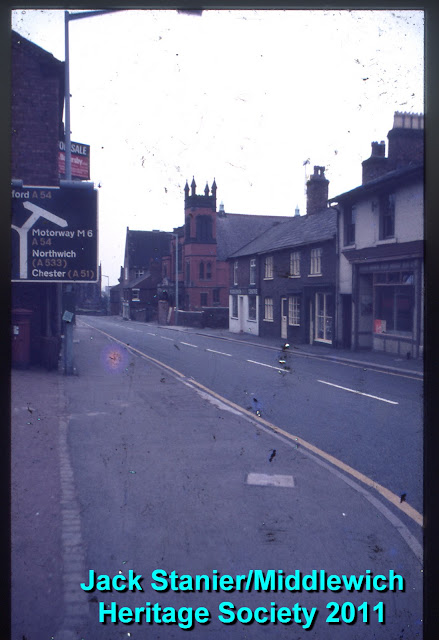 Jack Stanier was out and about recording the passing Middlewich scene at the same time as I was and most of his 35mm slides date from the early 1970s. This particular photo was taken, probably in 1973, from outside the Victoria Building in  Lewin Street and shows, in the distance, those buildings we've visited a few times already in this series; the C of E Infant School, the Wesleyan Methodist Chapel and, between the two, 'Square One', the hardware shop.
We're dating this at around 1973 because the old workshops which fronted onto Lewin Street and Wych House Lane seem to have disappeared.
The white double fronted shop to the right of the chapel was, and is, Middlewich D.I.Y. and to the right of that are the shops which, at that time, were owned by the Howes family, of 'Howe's Pies' fame.
The pie shop itself was the one with the small window in the middle of the block, with its door  to the left.
There's a picture of the pie shop here, in a posting which tells a little about this Middlewich institution, but, in those days, there was no sign to indicate what the shop was. Presumably it didn't need one as the fame of the celebrated pies had already spread far and wide. They had been made on the premises for at least twenty years before this picture was taken.
To the right of the pie shop is Roland Howe's second hand shop where, as well as used furniture and the like, items such as brand new gas mantles, oil lamps and packets of 'dolly blue' could be bought, reflecting Roland's practice of buying up unsold stocks of such arcane material.
On the extreme right is a former butcher's shop which is now the 'Middlewich Fryer' (but still known to many as 'Giorgio's').
I'm not sure if the shop had started its new life as a chip shop at that time. It's hard to tell from this photograph. If not, it wasn't too long afterwards that fried potatoes and cod took over from prime cuts of beef and lamb.
In its original guise the chip shop retained the  tiling from the butchers business, showing idyllic rural scenes of cows grazing in meadows, but these are now long gone.
The road sign, to the left of the picture is of interest, although it's a shame that Jack didn't point his camera just a little more to the left so that we could see the whole thing.
The strange road configuration to the right of the sign shows Leadsmithy Street and its junction with the A54 on the Town Bridge, pointing the way to Winsford to the left and the M6 in the other direction. 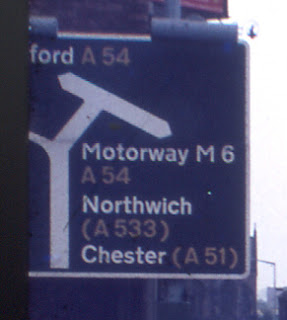 The sign, inadvertently, gives the impression that Junction 18 of the M6 lies in a South-Easterly direction and, although Northwich and Chester are given as destinations on the sign, there is no indication that a left turn into King Street is needed to get there (although the road number is given. Years later, when Croxton Lane became the main route to Northwich, the section of King Street  between Kinderton Street and the Croxton Lane junction was declassified. In fact the sign seems to be telling motorists that both Chester and Northwich are also South-East of Middlewich.The road numbers in brackets are the clue to the real situation. The indication for the A54 to Winsford, which is partly visible at the top of the sign, does not apply to the M6 connection as might first be thought, but refers to the left hand route over Hightown which now, of course, runs in the other direction - i.e. from the Bull Ring to Lewin Street .

Geraldine Williams I'm pretty sure that the butcher's shop was yet another Co-op enterprise, and the building on the right of it (now demolished) was the Co-op drapery store. The building with the For Sale sign on the opposite side of teh road was also a Co-op shop, but I can't remember what it sold. That shop eventually became a laundrette, which also had a coin-operated dry cleaning machine.

Dave Roberts You're right, Geraldine. The laundrette was supervised by a Mrs meakin who had twin sons. It was a grocer's and general provisions shop in Co-op days. Nowadays, of course, it's Rowlands Chemist and Middlewich post office. Mr James Hardy is the current manager.

Dave Roberts We have an old picture somewhere showing the shop as a grocer's, with the Crown Hotel (now the Narrowboat) next door. We had it on our fridge door suring the time when two of Lynne's sons, James and Peter, were working in adjacent buildings: James in the Post Office and Peter as Chef in the Narrowboat.

Stephen Dent Not forgetting The Danes.

Geraldine Williams Yes, even the carpets had a Great Dane pattern, didn't they?

Dave Roberts They did. A carpet specially commissioned by the landlord, rumour had it, who was the world's foremost Great Dane fan. So much so that he reputedly named the pub after his own dogs.

Andrew Tomlinson Re. the road sign. it is correct as far as I can see. The first branch left is High Town, then short straight to what is now the lights. Turn left for Winsford and right for M6, Northwich. Further signs before station bridge would direct straight on for M6 and right turn for King Street.

Dave Roberts Yes it's right, just a little confusing if you don't know the area. As you say, once you've turned right at Town Bridge everything becomes clear from the signs in Kinderton Street. I think what causes the confusion is that there were two routes to Winsford then - over Highton and by turning left at Town Bridge. I don't think anyone ever had a problem, though.

I think the point that Andrew is making is that the sign in question, seen here in its entirety, is a diagram rather than a map, in just the same way that the London tube 'map' is. It's not really deigned to tell you where you are, just where to go.