HIGHTOWN and THE KINGS ARMS 1970 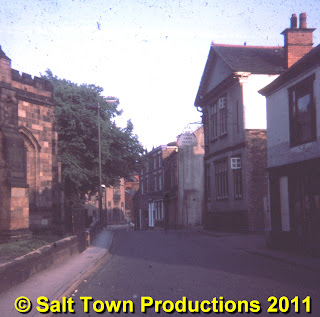 This is Hightown in 1970, looking, on the face of it, not very different from the way it looks today. On the extreme right is what would, at that time, have been Hulme's Grocers, although there is little here to indicate that it is a thriving concern of any kind. The shop is now home to the Accord Clinic, whose owners can always be relied on to provide interesting themed window displays when ever there is a festival or special event going on in the town.
Next left is the Kings Arms, complete with the original black and white version of its very ornate sign, which was later repainted in Greenall Whitley corporate colours. The sign itself has now been replaced by a simpler design, although the elaborately scrolled bracket remains.. The pub itself was a simple 'boozer' until the 1990s when it was refurbished and extended, as noted here.

On the other side of Queen Street is no 28 Hightown, later to be the home of Harold Woodbine's radio, tv and electrical shop and now the Parish Church's 'Drop In Centre'.


In the centre of the (main) photo it can just be seen that the C of E Infants School and the Wesleyan Methodist Chapel are still standing in Lewin Street.
Hightown itself - that is to say the actual carriageway - has changed considerably since 1970. The roadway has been altered over the years to accommodate changes in traffic flow. In fact, surprisingly enough, in 1970 certain sections of the road were actually wider than they are today, and the pavements narrower. A rare 'win' for pedestrians.

Facebook Feedback (from the 'Middlewich Diary' Facebook Group):
Chris Koons I remember Harold Woodbine's shop being there. Every Sunday morning, Dad would stop to comb his hair looking at his reflection in Woodbine's window before we went into Church & as far as I can remember, that was pretty much all the way through the 70s & possibly into the 80s LOL


In an e-mail Dave Thompson commented:

The windows in question can be seen here - ed.
Posted by SALT TOWN PRODUCTIONS at Sunday, October 30, 2011

Email ThisBlogThis!Share to TwitterShare to FacebookShare to Pinterest
Labels: HIGHTOWN AND THE KINGS ARMS 1970