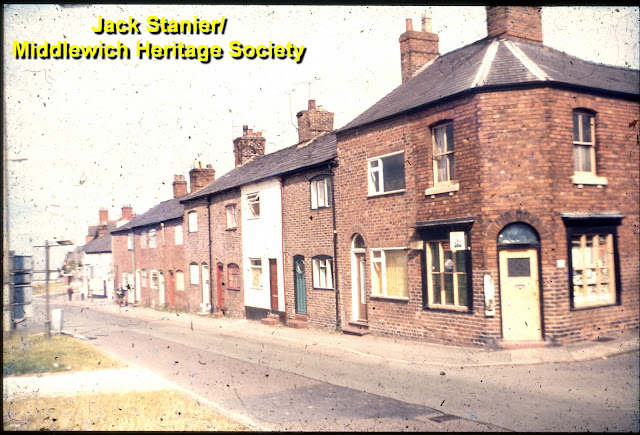 A 35mm slide, companion to this one, showing the other end of this now-vanished row in Nantwich Road. Jack Stanier, who took the colour slide, describes it as 'late 60s', though it may, possibly, be from slightly later, and was probably taken at the same time as the  'Lea's Passage' slide. The entrance to Lea's Passage, as seen in that earlier photo, is at the far end of the row. and in the right foreground we can see the junction of Nantwich Road and Newton Heath, along with Risley's corner shop, representative of many such shops dotted all around the town, which served Nantwich Road, Newton Heath and Newton Bank - in fact, the whole of what used to be called 'Newtonia'.

I was born at number 15 in that row. There were 8 of us all living in a two up two down and the loo was outside .We were the Wilkinson family .

I remember. And wasn't there a Polish man who lived up there? I remember going to your house with Molly.....

In an e-mail Dave Thompson commented:


We lived at No. 25 Nantwich Road and I recall Risley`s corner shop was full of sweets/pop and other numerous household essentials!

I also remember the huge cinema bill-boards (on Newton Bank) directly opposite these houses.
I`ll ask my dad to advise which one was no. 25. I`m sure it had a window on the left side of the door but it definitely wasn`t next door to the shop. That much I do know!!
Happy days!
Posted by SALT TOWN PRODUCTIONS at Friday, October 28, 2011