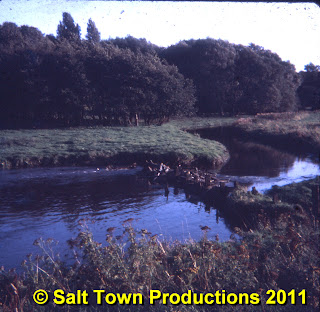 Another idyllic Middlewich scene from the Summer of 1967. The River Wheelock meanders through meadowland in the river valley below Nantwich Road  before running over the weir underneath Mill Lane. Behind the trees in the background is the aqueduct which takes Nantwich Road under the Shropshire Union Middlewich Branch canal. A second aqueduct, a few yards to the right, takes the river under that same embankment, and is said to be the twin of the familiar road aqueduct. On the extreme right of the photograph part of the.embankment can just be seen, taking the canal off in the direction of Church Minshull.
The Middlewich Branch was built late in the canal era. In fact by the time its construction was authorised the railway age had begun and the branch was built very much like a railway, with cuttings and embankments, rather than simply following the contours of the land as the earlier Trent & Mersey did.
In 1967 everything looked trim and neat and the area was  almost like parkland. This is not the case now, as explorations this Summer proved. The whole area is completely overgrown and it's almost impossible to even see the river from the little bridge over the weir in Mill Lane..
We'll be featuring 'Now and Then' shots in a future posting to prove the point.
Posted by SALT TOWN PRODUCTIONS at Monday, October 24, 2011