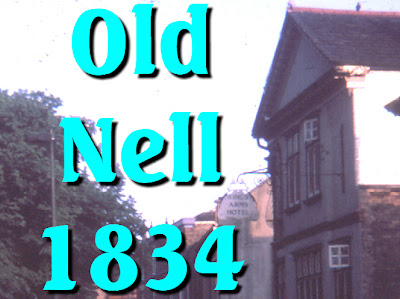 Editor's Note: When I was editor of the Middlewich Heritage Society Newsletter from the mid-80s to the late 90s, I commissioned my old friend and former schoolteacher John Brunker to write several articles for me
Well, actually, 'commissioned' is probably rather a grandiose name for what went on. I cornered him in the back room of the Kings Arms Hotel and plied him with pints of Greenall Whitley bitter until he agreed to write some stuff for me. The results usually arrived, several weeks after the deadline, in the form of notes, many of them indecipherable, written on scraps of paper and old envelopes and the like which I, after many late night telephone calls to John seeking clarification (not to mention 'urgent' meetings in the pub to discuss obscure points), would turn into articles.
This is one such article - just a brief fragment, really - and was,actually, a tailpiece to a longer article about the Kings Arms which will be featured here in due course. 'Old Nell', short as it is, does, I think, illustrate John's instinctive flair for storytelling, first experienced by myself and other enthralled youngsters in the late 50s at Wimboldsley School where John would regale us with ancient stories from his native Wales.
Somewhere in the archives I have a precious tape recording of John telling this little tale to Mel Scholes on Signal Radio's 'Pub of the Week' programme, when the King's Arms was the hostelry featured


Picture the scene. The tap room is crowded. It is market day and the town is full.
In comes a man, followed by Old Nell. Space is quickly cleared at a table for them both to sit down. The barmaid walks over and asks them if they would like their usual order.
The man nods his head and the drinks are delivered.
They are both well known in the town and questions are asked with regard to the odds on the afternoon's contest.
The man smiles and says they are 'good'.
Just then the clock chimes and it is time to go. A passage is quickly cleared for them and the pair depart, followed by most of the others.
They go down to the Market Square and make their way to the Bullring.
There is a stout post embedded in the centre to which two chains and shackles are attached. The two of them walk to it, and Old Nell prepares for her last performance.
Nell was the last bear to be baited in Middlewich. She was well-known in the town, and she loved her glass of beer.
(based on material from The Annals of Middlewich by C F Lawrence.)
© Salt Town Productions 2011