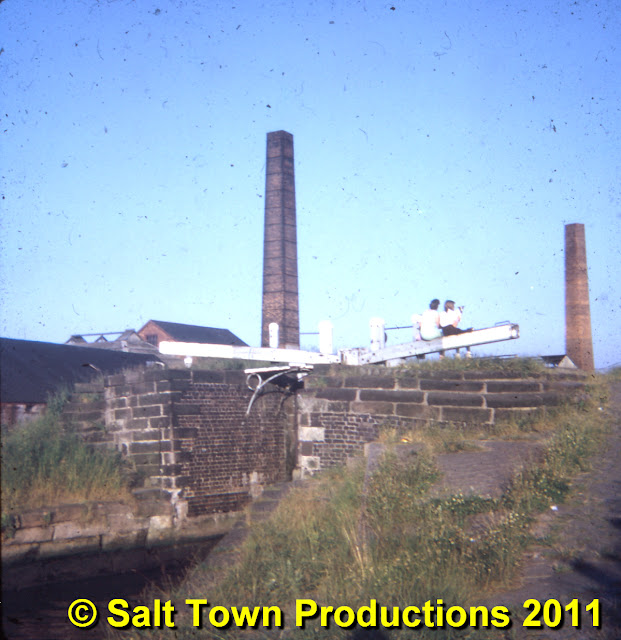 Now these two chimneys really are contenders for the title of 'last salt works chimney in Middlewich'.* In fact I think the one on the right took the title in the end. It's 1972 and five years after the old open pan works in the town were closed (Murgatroyd's, which was very close to here, closed in 1966). It's hard to tell from this particular shot what state the Seddon's Brooks Lane works was in, but other photos show it as in a state of partial demolition at this time. For obvious reasons the chimneys were always the last part of the works to go.
The Brooks Lane works was, in fact, never completely demolished; some of the retaining walls were kept and are still there today and recognisable as parts of a former salt works. And many of the buildings at the rear of the premises, close to the railway line, were retained and put to other uses. This is very unusual for salt works buildings which were usually ramshackle affairs, looking as though they were about to fall down  throughout their existence, and  largely unusable for any other purpose.
If you look closely at the  chimneys, it's possible to see that the one on the left, unlike others on this site, or any of the Pepper Street and Wych House Lane chimneys, has been strengthened by steel bands. Possibly this was to prevent damage from subsidence from the brine springs in the area. This strengthening was probably what led to this chimney and its companions surviving slightly longer than the chimneys at the other two works, its demolition and disposal being found slightly more problematical.
Incidentally these are the chimneys which can be seen in the background of our original Salt Town Productions logo: 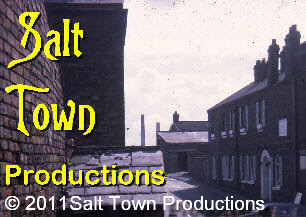 In the foreground (of the top picture) is the middle of the three Brooks Lane locks (referred to by some as 'The Big Three') which take the Trent & Mersey Canal down to the level it will stay at until it reaches the Big Lock.
Just out of shot to the right, the canal makes an abrupt right turn to make its way past Middlewich Narrowboats, the junction with the SUC Middlewich Branch and the Kings Lock on its way to Etruria.
In 1972 the boom in tourist activity on the canal was only just beginning, and the infrastructure was a little dilapidated. Notice the colour of the lock gates. Before British Waterways decided on black and white as an official colour scheme for lock gates etc, this very light greenish grey was the norm.
A few years ago it was decided to repaint the locks on the Shropshire Union Middlewich Branch a darker grey, as this was considered to be the 'traditional' colour for Shropshire Union lock gates. The lock gates on the T&M itself remained  uniformly black and white.
So where did the light greenish-grey colour come from? Was it a 'traditional colour' for lock gates, or just there because BW had a lot of paint of that colour?
I'm sure someone with knowledge of such canal matters will come forward to enlighten us.

* 'The last salt-works chimney in Middlewich'. A reference to the fact that the late Brian Curzon once published a photo of one of the Pepper Street chimneys being demolished and described it thus. These chimneys in Brooks Lane stood for years after the Pepper Street ones had gone. And, as we've said before, if we're really being pedantic, the 'last' salt works chimney in Middlewich - in reality more of a gas flue than a chimney - is still standing and in daily use at British Salt.


Andy Kendrick My nephew worked at the bus yard at the rear of the old Seddons works next to the railway line where one of the old building still is. They were doing some clearance work  and he said there are some tunnels underground there. Could this be something to do with the brine springs?

Ian Murfitt  Re the colour of lock gates. It has been suggested that the Shroppie used grey paint to decrease the impact of exposure to the sun, as opposed to black paint, which amplifies the effect.
There is however more compelling evidence that the Shroppie managed to purchase a significant quantity of surplus paint from the Navy on the cheap.
Posted by SALT TOWN PRODUCTIONS at Wednesday, November 23, 2011