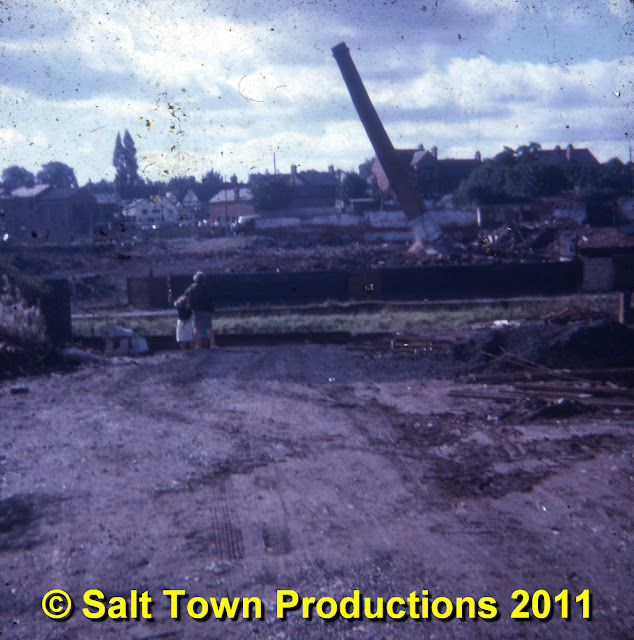 This once-in-a-lifetime shot is a companion to the photo in this posting. As we've observed before, our privileged position on the high ground in King Street, overlooking the town centre, afforded us a grandstand view of Seddon's Pepper Street works from the late 50s to the late 60s and, when the time came, enabled us to get this dramatic shot of the last chimney on the Pepper Street site in the last second of its life.
As explained in that earlier posting, these chimneys were not blown up or even subjected to the classic 'Fred Dibnah' bonfire method, but were simply 'felled' like trees by a man with a sledgehammer. If you look carefully at the whitewashed lower part of the chimney, you can see that a huge crack has appeared in the base of the structure as it hurtles to destruction.
These chimneys met their end in an almost dignified way, falling to the ground gracefully, with a loud but quite discreet 'whooshing' sound.
There are images of a chimney on this site being demolished on page 125-126 of  Middlewich - Images of England by J Brian Curzon and Paul Hurley but it has to be pointed out that Brian's caption is a little wide of the mark and  the chimney shown meeting its end in that publication was not only not 'the last salt works chimney in Middlewich', it wasn't even the last chimney on the Pepper Street site. The book shows a chimney at what we might call the 'town centre' end of the works meeting its fate, and crashing to the ground in the direction of the Big Lock. This was, in fact, one of the first Pepper Street chimneys to go.  The photo above shows the actual last chimney on the site which had been prepared so that it would fall towards the 'town centre' end of the site (i.e. right to left in the photo).
The last traditional brick built salt works chimney in the town to be demolished was in Brooks Lane, and will be featured in a  future posting.
Our photo was taken from Moreton's field, just off King Street. Just a little further down the slope, watching the proceedings, are King Street residents May Lemmon and Dora Darlington.
One technical note: It occurred to me while preparing this posting that I would be hard put to it to take this photo today with my Olympus digital camera - there is far too long a delay between pressing the button and the shutter firing. The old Kodak Instamatic didn't let me down.


Geraldine Williams Can you identify the white buildings - particularly the timber framed one - for us, please.

It's a little complicated and difficult to explain but in the enlarged section of the picture shown above, the large building on the extreme left is the Dewhurst The Butchers building in Pepper Street, together with the other large building to its rear shown here. The tall buildings to the right of that are actually shops on the opposite side of Wheelock Street.  Below them, but impossible to make out on this blurry enlargement, is the Vaults pub, which was, and is, a low building with a small shallow roof at the 'street' end only. The white buildings to the right of the pub are the two shops, now both hairdressers, which we tracked down as part of our 'Sharon's Cafe' investigation.
To complicate matters, the flat serving the Vaults is situated above these shops and there was at one time an entrance to it leading off Wheelock Street, with an additional door giving access to the pub itself. I think I'm right in saying that the entrance to the flat has now been incorporated into the pub.
To the right of the two shops the archway giving access to the White Bear's
car park can just be seen, and the distinctive black and white half-timbered building, centre right, is the White Bear itself.
Finally, to the right of The White Bear are the pub's outbuildings,  known to some as 'Lady Anne's Court'.
The relative positions of the Vaults, the two shops and the White Bear can be seen in the photo below 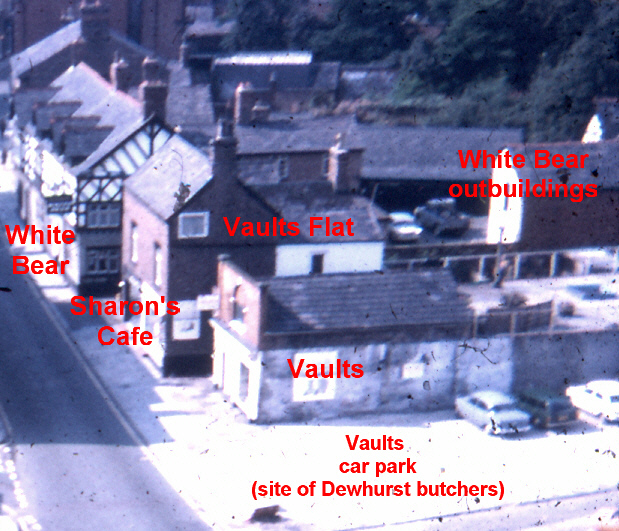 This, of course, is just my interpretation of what can be seen here. As always I'm open to corrections and additional information - ed.


Geraldine Williams Thank you. It makes perfect sense now. I was thrown by the Dewhurst the Butchers building still standing. I thought the half-timbered building could only be The White Bear but it looked as though it was on the opposite side of Wheelock Street!


Geraldine Williams This is really impressive Dave. All it's short of is a 'You are here' arrow!! And it's good to see that 'Sharon's Cafe' is now immortalised forever......
Posted by SALT TOWN PRODUCTIONS at Saturday, November 05, 2011

Email ThisBlogThis!Share to TwitterShare to FacebookShare to Pinterest
Labels: BUILDINGS IN WHEELOCK STREET 1971, THE LAST CHIMNEY IN PEPPER STREET 1971