Maureen Leverington writes: I would like information about Newton Hall and also all the houses on that side of St Ann's Road from no 72 down past Hannah's Walk, if that is possible please. That section of houses (nos.72,70,66,64) are extremely old yet little seems to be known about them. I was however told by a previous occupier of no 64 that the flat behind the house was used as the maternity hospital during the war and certainly in this lady's occupancy a small, heavily barred room (no longer there) was situated in the attics. This room would have been used for controlling a lunatic.
Here are three of the houses Maureen is referring to:

Our montage shows numbers   66, 64 and 62. No 62 isn't mentioned in Maureen's
original query, but is a historic and much-admired house which has been put
forward as a possible site or near-neighbour for the slaughterhouse which
Keith Bagnall was asking about here
UPDATE - NOVEMBER 23rd 2011 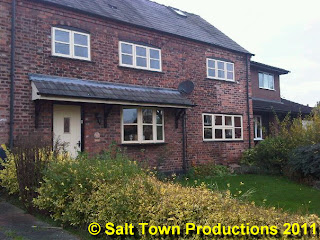 Here's another of the houses Maureen mentions, no 72, as it was on the 23rd November. Obviously very old and much altered, it stands to the left of the other three houses seen above. Number 70, though, which can just be seen to the right of the picture is a modern house (most likely built in the 1980s from the look of it). Presumably it replaces a much older house? And what happened to number 68? There is a space between no 66 and the new no 70, where it could have been.


If you have any information on any of these houses and their history, please don't hesitate to get in touch.

Facebook feedback:
Geraldine Williams: The third house, with the porch (number 62 -ed) was owned by the Bromwich family - certainly from the late 1940s untila  few years ago. John Bromwich had the chemist;s shop at the bottom of Southway*. The chemists was previously owned by Mr Holland and John, who came to work there, married the daughter, Dorothy, and eventually took over the business. So perhaps the house was previously owned by the Hollands, which would take it back to the war years at least.
* This chemist shop is now one of the two Rowlands Chemist shops in the town at the present time - ed


Geraldine Williams
John Bromwich continued to dispense at the shop until ill-health and age forced him to retire (at the end he had to travel by taxi from his house to the shop). He was often called 'Dr John' because Middlewichers had such faith in his good advice. He had a very affable assistant named Joe, who used to cycle down daily from his home by Minshull Vernon railway bridge. His wife Dorothy (who also was always impeccably made-up, Ann) sadly drowned in the canal some time after John died.