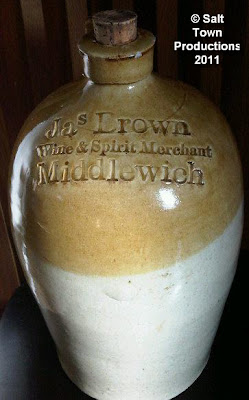 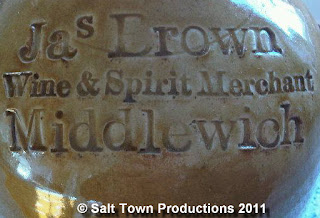 Nothing's ever simple, is it? We came across this Middlewich artifact lurking in the kitchen of my sister's house in Nantwich Road, festooned in greenery and serving as an ornament. Seemingly it had turned up with a lot of other pots and bottles in 'Uncle' Harry Shore's shed in King Street after his death. My first thought was that it was, obviously, a companion piece to Carole Hughes' brandy bottle which we were looking at here. 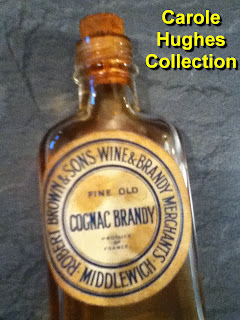 But, you will have noticed, the name is not quite the same. The beer flagon is marked Jas Brown (which, following my faux pas over Dr Murphy's first name, I am tentatively suggesting is short for 'James') whereas the label on the brandy bottle has 'Robert Brown & Sons' on it. And James is described as a 'wine & spirit merchant', Robert & Sons as 'wine & brandy merchants'. So was James one of Robert's sons?  Or did Robert come after James? Which is older, the brandy bottle or the beer flagon? Are these people both members of the Brown family of 'Brown's Vaults' fame, or was there, perhaps, more than one Brown family in the wine and spirit trade in this town? Unlikely, but not impossible.I feel another bout of research coming on...
Posted by SALT TOWN PRODUCTIONS at Saturday, November 19, 2011