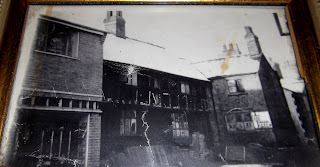 We're delighted to have received this photo from ex-Middlewich resident Maureen Condra who now lives in America (hence her explanation that the 'sidewalk was being repaired' when the picture was taken). The picture shows her birthplace at 40 Lewin Street. On the extreme right is the distinctive end wall of the White Horse and the building on the left looks like the present day (but, sadly, soon to be closed) Niddrie's Toy Shop. The buildings in between the two have now been replaced by open space - i.e.the White Horse's car park and a short access road to the rear of Niddries.  Notice, on the building next to the White Horse, one of those old road signs, similar to the one we saw on the end of Costello's shop in Kinderton Street. Many thanks to Maureen for letting us see this photo.

See also  The End Of An Era