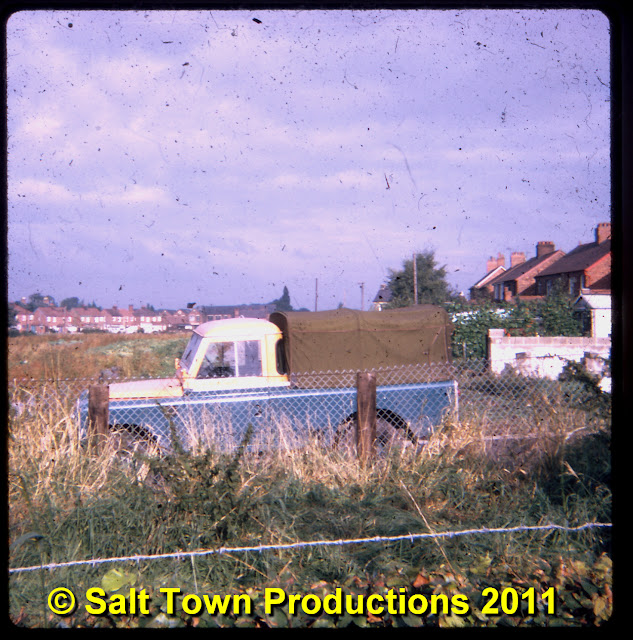 This may, at first glance look like a rather mundane photograph of a rather ordinary vehicle. We are, of course, 'snappers-up of unconsidered trifles' but why should we publish a picture of an old Landrover? The clue is in the colour scheme, but there are also  other points of interest in the photo which may not, at first, be apparent. First, to the colour scheme of the vehicle. Seasoned veterans of this series will know that it's the famous Tangerine and Delft blue livery of the Middlewich UDC in its final glory days. The Landrover belonged to the newly-formed (and short-lived) Water Pollution Control Department which operated the new sewage works which had just been built (many years after it should have been) off Holmes Chapel Road at the end of the optimistically titled 'Prosperity Way'. One of the pumping stations associated with the works was (and is) at the bottom of an access road leading down from King Street (the authorities having decreed that, as we already had a derelict salt works and gasworks to look at from our bedroom windows, we might as well have a sewage pumping station as well). The Landrover is pictured here near the top of that road. The slide was taken from our front garden at 33 King Street.
So far, so ordinary, but the passage of time has rendered this photograph  much more interesting than it once was.
For a start, the field behind the vehicle belonged to Bert Moreton and was the scene of much frenzied activity in the potato-picking season when adults and kids from all around would descend on it to earn a few shillings.
Sometimes the field would be given over to cabbages and one year there was an infestation of caterpillars which covered not only the field but all the gardens near it in a squirming blanket of the little creatures. An eerie sight.
The latest crop to cover the field is a crop of the ubiquitous Town Houses which are to be found all over this and every other town in the country. Sic Transit Gloria Mundi.
Secondly, looking at the skyline: The houses on the left are in Webbs Lane: just above the roof of the Landrover is the now long-gone Silk Works in Finney's Lane and, finally, just to to the left of the tree on  the right and a few yards further on was the entrance to what is now known to have been a Roman fort in Harbutt's Field. The road to the fort's entrance would have run from Brooks Lane through here,  lined with industries such as  salt and iron works serving the fort and its inhabitants. Behind the tree itself can just be glimpsed the 'Stone Houses', something so rare in this brick-built town that they were singled out and given the name. Legend had it that the stones used were left over from the building of Strangeways Gaol. The path leading from King Street and, ultimately, along the River Croco to the Big Lock, which went (and still goes) past these houses,was the gateway to a wonderland for kids, known for generations as 'Down Bill Hewitt's'. At the top end, down by the River Croco,  were the remains of an old salt works once owned by the Salt Union. Sadly, 'Bill Hewitt's' too has succumbed to Town House mania,
Posted by SALT TOWN PRODUCTIONS at Thursday, June 16, 2011