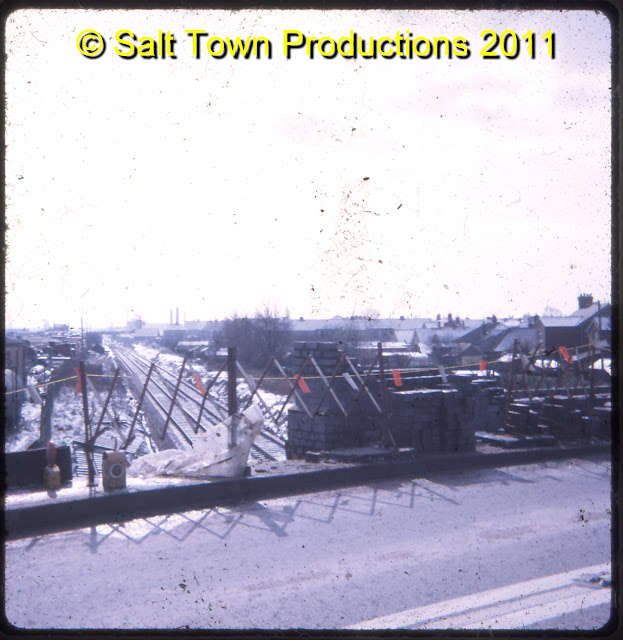 by Dave Roberts
The King Street Railway Bridge in 1975. There is snow on the ground so this could be either early or late in the year, though I have a feeling it's more likely to be early 1975. A truck (or lorry) has gone out of control and demolished the parapet on the Sandbach side of the bridge. I don't think the lorry in question actually 'plunged onto the track', but the 'Middlewich Chronicle' reported excitedly that 'there was a train coming at the time!'. In those days this would be quite likely, as the Middlewich line was very busy with freight during the sixties and seventies. However, disaster was averted and the drama was quickly forgotten. Curiously, when British Rail, as it was at the time, came to rebuild the bridge parapet they rebuilt it exactly as it was before, with no modifications to prevent an occurrence of this incident. One might have thought a crash barrier appropriate, perhaps?
To the right, below the bridge, was the edge of my Uncle Harry's garden (he lived in the house next to the end house, just before the bridge, but his garden was L-shaped and extended along the railway to the bridge) and this was my favourite trainspotting position. From this vantage point, very close to the tracks, it was possible to see, on the chairs holding the rails in position, stampings such as 'LNWR 1899'.
Returning, briefly, to the 'Middlewich Chronicle', their reporting of this incident was typical of journalism at the time. There was a definite thirst for sensationalism (though not the depressing, dismal, alarmist kind we see today). On one occasion there was, or was thought to have been, a bank robbery in Middlewich. The 'Chronicle' sent a photographer to take a photo of the bank in question and published it with the caption: 'The bank - seconds after the raid'!
On the skyline, to the right of the Holmes Chapel Road bridge the last two remaining open pan salt works chimneys in Middlewich can be seen.
They were part of  Seddon's Brooks Lane works and lingered on for years after all the other salt works chimneys in the town were long gone.
Posted by SALT TOWN PRODUCTIONS at Saturday, June 11, 2011