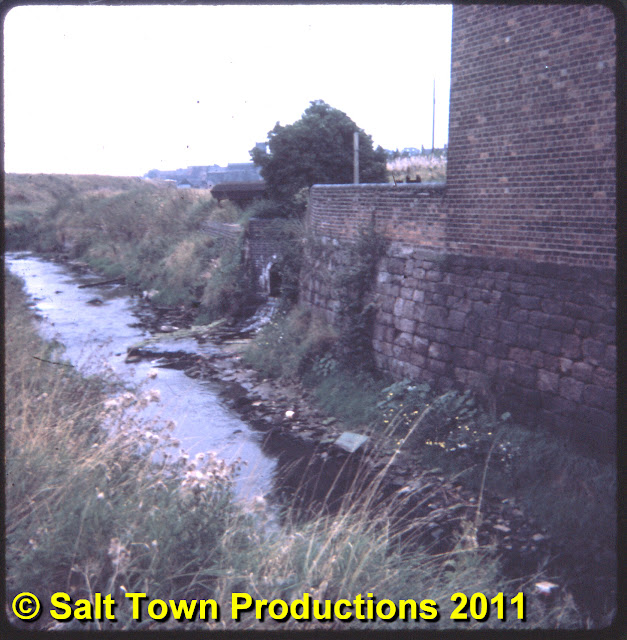 Today we briefly return to the old lock keeper's cottage at the Big Lock in 1974. This picture shows the rear wall and 'sheer drop' to the River Croco behind the building. In the centre of the shot is the overflow channel which ran (and still runs) from the pound above the lock into the River (not from the lock and underneath the cottage as we said in our original entry for June 10th). With the flair and attention to detail of the canal-building era, the exit from the overflow is not some mere concrete hole, but a brick built miniature tunnel entrance. The problems which plagued the cottage throughout its existence can be seen here, with the decidedly unsafe - looking foundation wall forever threatening to collapse into the river. This was, presumably, stabilised when the cottage was finally demolished. Nearby is a footbridge over the river leading in turn to another footbridge over the lock itself. In the 50s and 60s this little river bridge was another health and safety hazard. It was of wooden construction and became more and more rickety over the years until it was replaced by the present concrete and steel bridge in the late 60s.
Before the coming of the Trent and Mersey Canal the River Croco wandered all over the bottom of the valley as rivers are wont to do. When the canal was built the river was channelled and made to run alongside it from Brooks Lane, through the town and to a point beyond the Big Lock, at the bottom of Harbutt's Field. There the Croco finally parts company with the canal and joins the River Dane. This, of course, made the  river very useful as an overflow channel and there are many such overflows along the length where canal and river run side by side.
For more on the cottage, see this entry
Posted by SALT TOWN PRODUCTIONS at Wednesday, June 15, 2011