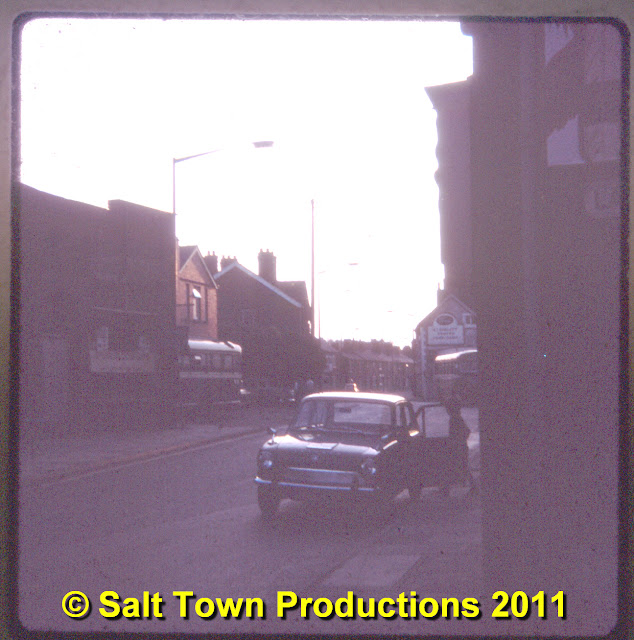 Here's a 'late evening' shot of the top end of Wheelock Street (in Middlewich-speak, 'Toppender Wheelock Street'. Note that in the case of the street the name is pronounced as seen, whereas in the case of the village it's named after- and where I was born, by the way - it becomes 'Willock'. There is no 'Bottomender Wheelock Street'. That's called 'The Bullring'). The slide is dated 1970.
It's a pity that this slide is so underexposed, as there is so much of interest here. We would be delighted to hear from anyone who has a better picture of this area, not least because we were recently asked by Middlewich Community Church if we had a photo of the former Crosville Garage, which is now home to the MoCoCo cafe.
Clicking and double-clicking on the photo will help you to better identify what lies in the murk. On the left is the building which now houses 'The Cabin', at this time in use as a garage and workshop. The building was originally the town's first cinema, 'The Star'. To the right of this, underneath the street lamp, is a Crosville double-decker bus, stabled there overnight. I think I'm right in saying that, by this time, the Crosville depot itself had closed. Above the bus can be seen Gater's pie and cake shop which has been closed for many many years but still has its original shop front. Beyond that is the Cheshire County Council's clinic (now the 'Acorn Surgery') and beyond that the Red Lion. On the opposite side of the road you may be able to make out part of Whiston's Garage, as seen in previous photos. There's another Crosville bus directly below the Whiston's sign. This will be parked outside the low one-storey building which, as Geraldine Williams reminded us, was Whiston's radio department. In the present day  a brick-built bus shelter and a couple of telephone kiosks occupy more or less the same spot.
In the foreground is one of those bland and boring 1970s cars. It's hard to believe that at this period the country's short-lived love affair with the car was at its height.
See also: WHEELOCK STREET (TOP END) 1969
Posted by SALT TOWN PRODUCTIONS at Thursday, June 23, 2011