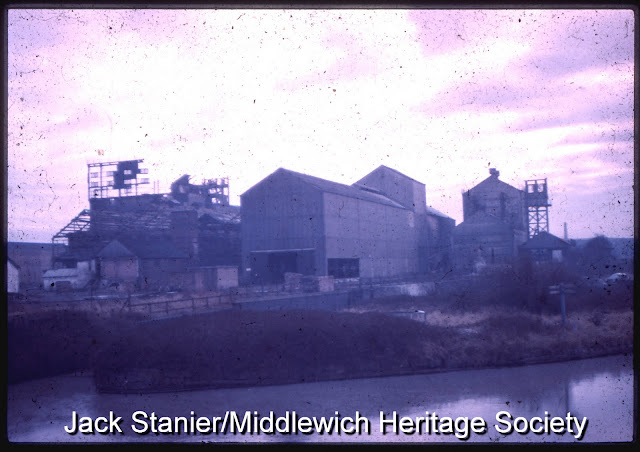 This murky scene of industrial dereliction shows the old ICI Middlewich works in the process of being dismantled in the early to mid 60s. The works closed in 1962 and the demolition seems to be in a fairly advanced state, so the photo, taken by Jack Stanier, probably dates from around 1964-5. The large building in the middle of the shot was retained by Pochin Ltd when they took over part of this site in the late 60s, as were many other buildings on the site. At least one survives today, running along 'Road Beta' and adjoining the wrought iron works gates which still also survive largely intact. The other end of the site, filled with railway sidings in ICI days, was completely cleared and became home to ERF's Service Centre in 1971. The old ERF buildings also still exist but have been reclad and are anonymous and nondescript in their present guise. The structure to the right was part of the works' limestone crushing plant and to the right of that, out of shot, was (and still is) the King's Lock pub. If you look closely at the slide you may also be able to pick out the cast iron canal signpost which directed boats to Chester via the SUC Middlewich Branch