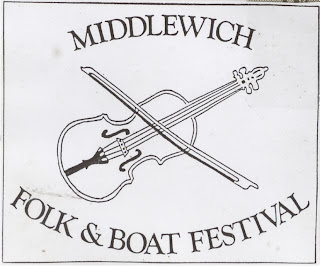 The original Middlewich Folk & Boat Festival started in 1990, and here we see the festival's very first logo. 1990, although not so long ago really, was in the days before personal computers and so all publicity material was produced by extensive photocopying at  unsuspecting local firms (cheers, ERF ). I was the festival's publicity officer at the beginning and spent hours making posters from stencils, bits cut from magazines, and Letraset (remember that?). Then  everything had to be copied and distributed. The burden was eased a little when Mike Hough, another festival pioneer, offered the use of his own office photocopier, but it still meant many hours sweating over a hot machine. And Mike, together with Peter Cox, used to make all the roadside signs and put them up and take them down again.
I knew that we were getting it right when one of the 'Keep Middlewich Miserable' brigade approached me and said he was 'sick and tired' of hearing about the festival. Quite. Although our photo shows the original MFAB logo, it is not quite as it started out. The original was embellished  with little crotchets and quavers (the poster designer's favourite way of indicating 'music') but all the copying and recopying caused them to disappear over time and soon everyone forgot that they had ever been there.

See also Who knows where the time goes which shows the first festival programme with original logo complete with musical notes
Posted by SALT TOWN PRODUCTIONS at Saturday, June 18, 2011