GREEN'S SHOP IN HAYHURST AVENUE - A CHANGE OF LIFESTYLE 1990s 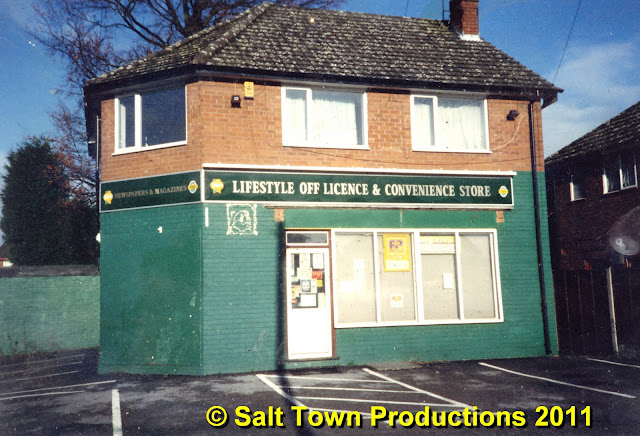 One of those unregarded and unloved buildings around the periphery of Middlewich which, nonetheless, are part of our social history. This one was on the corner of Hayhurst Avenue and Eaton Drive and close to the southernmost entrance to Rolt Crescent. Many people who have lived in the area remember it as simply 'Green's'. It was also, at one time, called 'Round The Clock'.

By the time of our photograph, which we've labelled '1990s' but could just have been taken in the early 2000s, it had closed down (very suddenly, without warning, and leaving its many local customers in the lurch). Sadly, like many such empty buildings it became the haunt of the type of brain-dead moron which infests this and every other town and they eventually managed to set it on fire, leading to its demolition. A couple of houses now occupy the site.

The demise of these local shops is a great pity (though the Poplar Stores in Poplar Drive, for one, seems to be thriving). They provided a great service for those willing to pay a little more and not have to trek into the town for bits and pieces. We lived opposite this shop for a year and used it as the ultimate Convenience Store. How nice to be able to nip across the road for a few cans of beer whenever you need to. This is comfort indeed!
Posted by SALT TOWN PRODUCTIONS at Saturday, June 18, 2011